There appears to be a huge amount of traffic and discussion through different internet forums about rocket mass heaters and reports from the authors on sales of the book on the subject confirm this incredible surge in interest. I am quite certain that this excitement stems from the tangible possibility that the rocket mass heater concept offers to individuals and families to build their own affordable efficient wood-fired heating system. I thought it would be interesting and useful to offer the following synthesis of recent research I have been directly involved in and links to information that others have provided to feed more fuel to the fire of this interesting global conversation.

The Difference between Rocket Stoves and Rocket Mass Heaters

First, a clarification regarding terms may be useful. The term “rocket stove” and “rocket mass heater” are often used synonymously and interchangeably. Especially as the conversation grows, I think it is worth clearly defining and distinguishing between the two. The rocket part they share in common has to do with insulated J- or L- shaped combustion chambers that allow for a brisk and relatively clean “cigar-type” burn. “Rocket stoves” are usually low in mass and focused on transferring the efficiently generated heat to food or water in pots for cooking or bathing. “Rocket mass heaters” focus the heat generated into heat exchangers that radiate and conduct the heat out into an environment. They often involve a hybrid of a quicker releasing metal heat exchanger (usually a barrel) with a slower releasing, heat-storing battery which offer sustained heat and often takes the form of a bench. This article is about rocket mass heaters and I hope that this distinction in terminology is helpful as we develop a global conversation about these different wood-burning appliances.

The Book on Rocket Mass Heaters

There is a wonderful book on Rocket Mass Heaters. The book, which will soon be published in a new third edition, is the fruit of a collaboration between inventor Ianto Evans and creative publisher Leslie Jackson – with the hands-on assistance of two professed pyromaniacs: Kirk “Donkey” Mobert and Ernie Wisner. The drawings are excellent and together with the well-crafted text do a great job of sharing subtleties of wood-fired combustion, why this kind of “upside-down fire” works, and the basic process of building a rocket mass heater. The book strongly reflects the authors’ philosophy and involvement in the natural building movement which emphasizes a strong Do-It-Yourself ethic and the use of locally available and recycled materials. The main materials used for their model rocket stove are cob, a relatively small amount of firebrick, a recycled 55-gallon drum and recycled or new stove pipe. In some ways, this book like any other I presume that addresses a new subject, is very specific to the author’s experience and describes one kind of rocket mass heater that worked for them and birthed in them the conviction to share this promising idea with others. And this is exactly what has happened. The book has both inspired many to copy what the book proposes exactly as well as others to tinker further and experiment around the basic principles and shapes that it proposes.

During my time working with Ianto at Cob Cottage Company, I became familiar with the Masonry Heater Association of North America and decided to attend their once-a-year gathering in North Carolina. Due to a funny turn of events that involved a full airport parking lot in Denmark and a colleague missing his international flight to come and lead a workshop on one style of masonry heater, I was approached as I arrived and asked if I might lead a hands-on workshop on how to build a rocket mass heater. I accepted the invitation nervously knowing that I would be amongst many grizzled veterans of masonry and wood-fired heating. Well, as things go, the location chosen for the rocket mass heater was on the periphary, next to the lime-burning kiln that was being built in an adjacent workshop. We screeded sand to begin building on and laid up a classic J-shaped “rocket” combustion chamber.

Alex Chernov, a remarkably accomplished mason, came over and said: “Why don’t we put a bell around it?” I honestly hadn’t even heard of what a “bell” was in the context of masonry heating but the spirit of collaboration was rife and within a couple of hours we had built and lit a fire in a hybrid heater that combined years of experience gleaned in the temperate rainforest of Oregon with other experiences developed through long winters in Russia through the happy coincidence of people meeting and working together.

The most significant circumstance, though, was that that night happened to be a very cold night. The crew that manned the lime kiln through the night stayed very close to the heater and built wooden benches on either side of the bell to sit near it. The tangible usefulness of this quickly and simply-built heater, along with the rain, inspired us to continue experimenting. We ripped that heater down the very next morning, moved inside, and started building another one that would keep our group warm through that particularly cold annual gathering.

There are many stories that can be told but the one that I want to share here is about the experimentation on rocket mass heaters that I have experienced in large part through the collaborative and inquisitive spirit and support of members of the Masonry Heater Association. The experimentation takes the concepts introduced in the Rocket Mass Heater book as a starting point. This research differs in its use of brick rather than cob as its primary building block and in a departure from adherence to the idea that the flue path need to have a consistent cross-sectional area through the system.

The commentary only really makes sense if you first study the photo reports in these links: 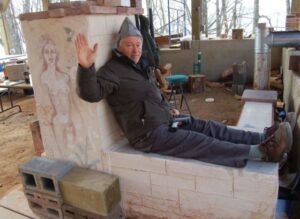 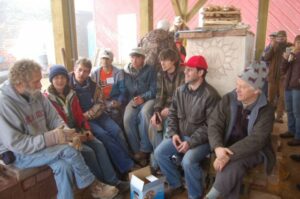 You actually see two rocket mass heaters built in this sequence. The first shows the very simple bell heater that was built. The bricks you see inside the bell were placed there to support “capping slabs” that weren’t big enough to span the whole distance as well as provide more thermal mass and baffling inside the bell.

The second heater was designed as we went and with consideration for the materials that we had. The rather confusing stove pipe was placed simply to test out the j-loop. We had originally planned to build a similar, if not larger bell, on the second one but when it became obvious that we needed to redirect bricks to the oven-building effort so that the oven could be completed for the annual pizza party, we de-constructed some of the bell and turned it into a bench. This turned out to be a great idea. The icing on the cake was to use the lime we had created a couple of days before to plaster the hot heater.

As several have commented, it was very surprising how well and hard that lime plaster set considering that it is contrary to conventional knowledge that a lime plaster applied to a piping hot surface and that dried in less than a minute would create such a stiff shell. We did not experience any cracking on this plaster single skin although it never really went through a cycle of cooling down and heating up since it was torn down while still hot. There was a lot of magic in this heater. Part of it came from the spontaneity and cooperative spirit in which it was born. Part of it from the synergy with the incredible lime plaster and the artists who helped render it. And a huge part of it was the real butt-warming heat it gave so many of us during a very cold and merry event. 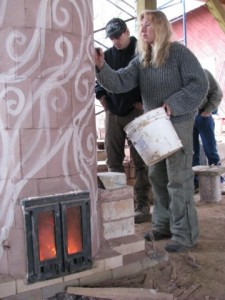 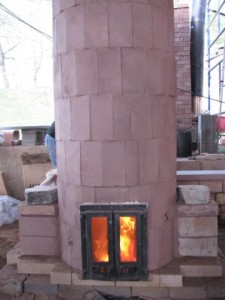 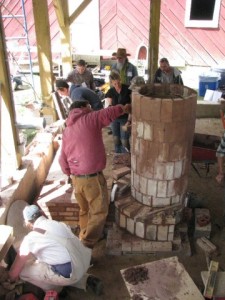 This was an interesting project. Jerry Frisch basically gave me free reign with materials and shop space to experiment and invent a heater that combined experience from both the rocket mass heater world and the masonry heater world. The heater’s design took into consideration people’s curiosity about alternatives to using a 55-gallon metal drum as well as the possibility of incorporating a safer, more enclosed, more visible, higher volume firebox. The brick work necessary to work in round shapes was perhaps overly fancy, especially considering that I cut all the bricks rather than sourcing an arch brick that would fit the shape.

You can see that we maintained the idea of an insulated heat riser by insulating with perlite between a stainles steel pipe and ceramic square flue liners. The combined layer of splits and fulls on the outside are a little confusing and reflect a token effort at addressing code considerations of a minimal thickness on the outside skin. The bench surrounding the heater was a little too shallow in retrospect and in general the heater was a little too delicate for my taste.

When Jerry burned it in his shop after a drying period, he noticed that the fire wasn’t getting enough air from the air-supply in the door. When we built it at WildAcres, we included Jerry’s suggestion of incorporating additional air in such a way that encouraged a vortex for improved mixture in the combustion process. In general, I think there were some interesting ideas explored in this heater but that it was the least succesful. 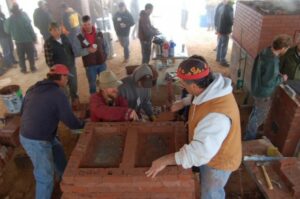 At this WildAcres, I had resolved not to be involved in a project in order to participate and learn from others’. Well, by the third day or so the buzz about a “Rocket” was escalating and Kathleen mustered enough committed volunteers for us to attempt another. This was my favorite build of this series. We literally threw this rocket mass heater together during the two hours before and two hours after lunch on a single day. There was absolutely no planning done beforehand and the basic layout was sketched out in real time on the ground as the bricks dictated a brick-based layout that was simple and required almost zero cutting for the entire project.

The basic premise of this heater was to really test the bell idea by making the volumes inside much bigger than would be determined by following the idea of having a consistent cross-sectional area throughout the system. Unfortunately, I am not sure that there are any decent photos of this heater finished which essentially show that it worked well, that it burned clean and easily, and that people enjoyed its heat. Note that there are two passage ways on either side of the heat riser that allow gases to pass from the first bell into the bench bell.

The main conclusion of this essay is to affirm the application of the “bell” design principle to the construction of “rocket” mass heaters. It is a promising and interesting direction. Maintaining a consistent cross-sectional area in the flue path of a rocket mass heater, as set forth in Ianto and Leslie’s book, is not the only way to design a rocket mass heater that is successful and works well.

Some Links for Further Reading:

Hand Print Press began in the early 90s, when I self-published Build Your Own Earth Oven. I was thinking of myself as a capital A  Artist. However, as I learned from the garden and other teachers, art just means “to fit together” — it’s how the world works — flora, fauna, humans — all must fit themselves together, with each other, with the landscape, with wind and weather. In addition to the bookstore (which now includes a few other authors), the site contains stories and updates on ovens, heat, baking, beauty, agriculture, fire, community, culture, (spoon) carving, etc. It’s all art! Thanks for visiting. You can contact me at handprint at cmug dot com, or thru instagram.
— Kiko Denzer